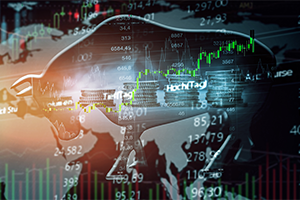 There’s a lot of doom and gloom in the economic news lately, including in our newsletter articles. There is much to worry about, but that doesn’t necessarily imply a disaster is coming. In fact, history is pretty clear that when all the “experts” are in agreement about a future event, the opposite transpires.

Today, market sentiment is about as bad as it gets. The black line in the chart below shows how individuals and institutional investors feel about the prospects for the stock market. It is almost as low as it was in 2008. That is not terribly surprising given how both stocks and bonds have performed so far this year. However, sentiment tends to be a contrary indicator. Usually when sentiment is at its worst, the market is making a bottom and it is about to rebound. Indeed, looking at the low point for sentiment in 2008 shows that it bottomed just about the time the stock market (the blue line on the graph) was also making a bottom. So, with everyone sure that the market is going to get worse, it could be time to start thinking about a rebound.

There are some other reasons to be optimistic, including valuation. The stock market is not particularly cheap right now, but it is well off its high of late last year when the Cyclically Adjusted Price/Earnings (CAPE) ratio was 38. It currently stands at 28 for the overall U.S. stock market, still well ahead of the longer-term average of 17. However, there are segments of the stock market, including value stocks, international stocks, and small-cap stocks that are far cheaper. It is certainly possible that investors start to take advantage of these lower valuations, driving stocks higher from here.

It is also possible that a “short squeeze” could move stocks higher in the near term. When sentiment is as dismal as it is today, generally some investors, particularly hedge funds, will take short positions on the stock market, hoping to profit from further price declines. However, if prices move higher, those funds often act to stop their losses by repurchasing the stocks they sold short. That additional buying pressure could result in a quick rebound higher for stock prices.

It could also be that stocks move higher from here because there aren’t really any great alternatives for investors to park money. The bond market has not been the safe haven it has historically been during times of stock market duress, and investors are giving up on bonds with the prospects of additional rises in interest rates (which drive down bond prices). T-bills yielding 3% to 4% are far more compelling than they have been the past few years, but still are not keeping up with inflation. So, a long-term allocation to stocks continues to make sense, and could put a floor under further stock market declines.

Finally, the much discussed “Fed pivot” could transpire. The Fed has been raising short-term interest rates to battle inflation. Rising rates drain liquidity from the economy and hurt the valuations of both stocks and bonds. However, there is a growing chorus of economists singing that the Fed has gone too far too fast and that it will have to reverse course as it tips the economy into recession or causes a financial crisis. The Fed is not giving any indication of that so far, but history does show the Fed cutting rates when economic pain sets in. A cut in interest rates would likely move stocks considerably higher in short order.

This is not to say that we’re feeling terribly optimistic these days, but there is a case to be made that most of the damage in the stock market is past and there are some catalysts for a rebound from here. That is not our base case assumption, but this is the first time in a few months that we have been able to make even a modestly bullish case. That could mean we’re getting closer to the bottom.