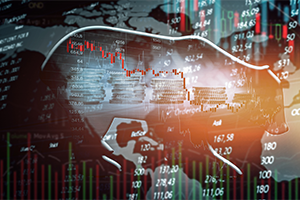 The field of economics is often referred to as the dismal science. Today’s environment certainly helps us understand that moniker. Inflation is running amok, interest rates are moving aggressively higher, stock and bond markets are both down considerably, and we may already be in a recession. It is not hard to paint a picture of more downside ahead.

All eyes have been on the Fed lately to cure these problems, notably by curbing inflation so the economy can resume a more normal growth trajectory. To do so, the Fed has raised short-term interest rates from close to zero percent less than a year ago to over 3% today. The Fed adjusts interest rates largely in reaction to expected inflation; raising rates when inflation is hot and lowering rates when inflation cools. Many economists believe the Fed is behind the eight ball currently as inflation rages, and indeed some even blame the Fed for causing our current predicament.

The most basic definition of inflation is often summed up as too much money chasing too few goods. If you think this through, there are two ways inflation can spiral out of control: too much money in circulation causing excessive demand, or supply constraints weighing on the availability of goods. Today’s inflation has both excessive liquidity and reduced supply. To confront excessive liquidity, the Fed can increase interest rates and engage in “open market operations” like quantitative tightening. Both of those are going on now, and the Fed has pledged to continue until inflation is under control.

The problem is that the Fed can’t really do anything about supply constraints. In fact, it may make matters worse. By raising interest rates, the Fed will likely slow economic growth, perhaps even to the point of a nasty recession. If growth slows, corporate profits take a hit, unemployment rises, and there are fewer resources available to produce goods and provide services, further reducing supply. Reduced supply could result in even higher inflation.

The other problem is that the Fed is not the only actor in this drama. While monetary policy is important, fiscal policy also plays a big role. Unfortunately, while monetary policy is restrictive, fiscal policy is still very expansive. The CHIPS Act, passed last month, will result in $39 billion of new spending. The recently passed Inflation Reduction Act authorizes $391 billion in new spending, only somewhat offset by new revenue streams. And President Biden’s executive action forgiving student loans could, by some measures, unleash an additional $400 billion or more into the economy. We offer no comment on the social merits of these initiatives but note that this increased liquidity will, at least to some degree, offset the Fed’s efforts to curb inflation.

Federal, local, and international government policies are also weighing on supply. There have been few new permits for energy production this year, despite elevated oil and gas prices. This is an issue in the U.S., but even more acute in Europe where Russian energy has been cut off. Environmental restrictions make it hard to build new homes in many parts of the country, despite record- high home prices. And restrictions on farmers have led to unrest in Sri Lanka, the Netherlands, and Canada, and have also resulted in reduced food production, despite wheat trading near the highest levels in over 50 years. Some believe the solution to these issues is to transition away from fossil fuels, and that may solve some problems, but it could create others. For example, electricity is already in short supply in some markets, and it is unlikely there will be enough lithium and other materials if everyone starts driving electric cars, using electric lawnmowers, and moving aggressively away from petroleum-based products. It is also unlikely permits will be issued in much of the developed world to produce more of these minerals given the environmental impact of mining.

Unfortunately, that leaves us in a situation where inflation may persist despite the Fed’s best efforts. Those efforts will almost certainly slow the economy, so a stagflationary situation reminiscent of the 1970s cannot be ruled out.

What does that mean for the capital markets? In a word: volatility. The stock market hates uncertainty, and there is plenty of that, both now and likely in the future. Stocks historically do ok during periods of high inflation as asset prices also rise. However, slow economic growth is not conducive to stock market gains. Bonds could also rally from here, despite the Fed raising short-term interest rates, particularly if it raises rates too far and the economy tips into recession. But those scenarios are far from certain.

It is possible that we’re wrong in our assessment and the Fed will be able to engineer a soft landing. Still, the Pollyanna approach seems unlikely, so it is best to be prepared for a new era of increased ups and downs across all asset classes, and further declines in stocks.